Even if inadequately assessed treatments do not kill or harm, they can waste money. Eczema is a distressing skin complaint affecting both children and adults. The skin lesions are both unsightly and very itchy. Although the use of steroid creams helps in this condition, there were concerns about the side-effects of these treatments, such as thinning of the skin. 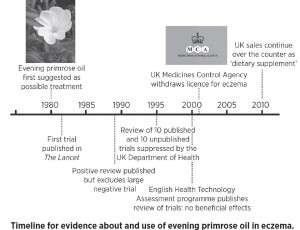 In the early 1980s a natural plant oil extract – evening primrose oil – emerged as a possible alternative with few side-effects.[11] Evening primrose oil contains an essential fatty acid called gamma-linolenic acid (GLA) and there were plausible reasons for using it. One suggestion, for example, was that the way in which GLA was transformed within the body (metabolized) was impaired in patients with eczema.

So, theoretically, giving GLA supplements should help. Borage oil, also known as starflower oil, contains even higher amounts of GLA and this was also recommended for eczema. GLA was believed to be safe but was it effective?

Numerous studies were done to find out but they gave conflicting results. And the published evidence was heavily influenced by studies sponsored by the companies making the supplements.

In 1995, the Department of Health in the UK requested researchers unconnected with the manufacturers of evening primrose oil to review 20 published and unpublished studies. No evidence of benefit was found.

The Department never made the report public because the manufacturers of the drug objected. But five years later another systematic review of both evening primrose oil and borage oil by the same researchers – this time it was published – showed that in the largest and most complete studies there was no convincing evidence that these treatments worked. [12]

There was one unturned stone – perhaps GLA only worked in very high doses. In 2003, even this claim was knocked on the head by a carefully conducted fair test. [13] Ironically, by the time these results were published, the UK Medicines Control Agency (MCA, which subsequently became the Medicines and Healthcare products Regulatory Agency, MHRA) had finally, in October 2002, withdrawn the product licences for two major evening primrose oil preparations because there was no evidence that they worked.

Nevertheless, since no concerns were expressed about the safety of evening primrose oil, it is still widely available over the counter as a ‘dietary supplement’ for various conditions. Regarding its use for eczema, claims of effectiveness are couched in vague terms such as ‘people with eczema may find relief ’, ‘may be helpful’ and ‘has certain medicinal properties that may act as an anti-inflammatory for conditions such as eczema’.

Review of the Key points

Next Chapter: More is not necessarily better