Do not imagine that only drugs can harm – advice can be lethal too.

Many people have heard of the American childcare specialist Dr Benjamin Spock, whose best-selling book Baby and Child Care became a bible for both professionals and parents, especially in the USA and the UK, over several decades. 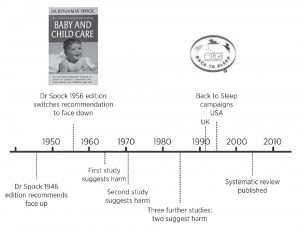 Yet in giving one of his pieces of well-meaning advice Dr Spock got things badly wrong. With seemingly irrefutable logic – and certainly a degree of authority – from the 1956 edition of his book until the late 1970s he argued:

‘There are two disadvantages to a baby’s sleeping on his back. If he vomits he’s more likely to choke on the vomitus. Also he tends to keep his head turned towards the same side . . . this may flatten the side of the head . . . I think it is preferable to accustom a baby to sleeping on his stomach from the start.’

Placing babies to sleep on their front (prone) became standard practice in hospitals and was dutifully followed at home by millions of parents. But we now know that this practice – which was never rigorously evaluated – led to tens of thousands of avoidable cot deaths. [1]

Although not all cot deaths can be blamed on this unfortunate advice, there was a dramatic decline in these deaths when the practice was abandoned and advice to put babies to sleep on their backs was promoted.

When clear evidence of the harmful effects of the prone sleeping position emerged in the 1980s, doctors and the media started to warn of the dangers, and the numbers of cot deaths began to fall dramatically.

The message was later reinforced by concerted ‘back to sleep’ campaigns to remove once and for all the negative influence of Dr Spock’s regrettable advice.

Next: Drugs to correct heart rhythm abnormalities in patients having a heart attack